What's On IN Napier

Whether you’re planning your next visit to Napier to coincide with one of the region’s many great events, or keen to find something to take in while you’re here, there are many terrific options, whatever the season.

For the full listing of Napier and Hawke’s Bay events visit the Hawke’s Bay Tourism events page. Below are our recommendations for the coming months:

An Evening with Michael Bublé 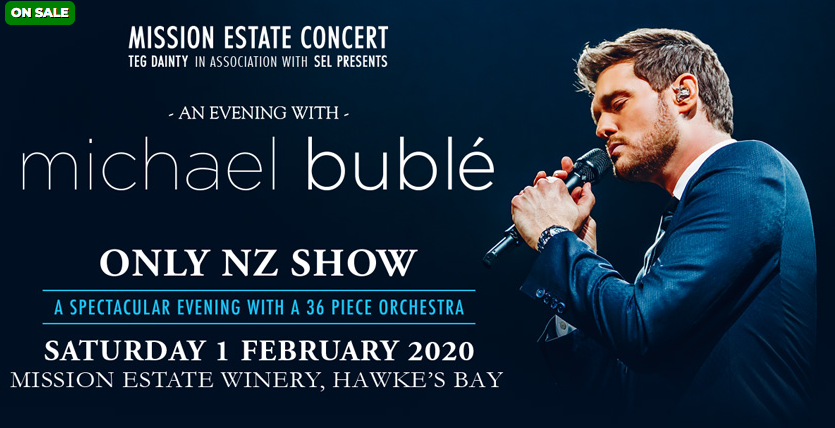 After five sold out world tours, he's back! Michael Bublé returns to New Zealand for his only New Zealand show!

Global superstar Michael Bublé will return in February 2020 with a 36-piece orchestra to thrill his New Zealand fans for one night only at the Mission Estate Winery, Hawke’s Bay. This will be Michael Bublé’s only show in New Zealand.

President and CEO of TEG DAINTY Paul Dainty said he was delighted to bring Michael Bublé back to New Zealand: “Michael is a superstar and New Zealand fans are amongst his biggest in the world, he is an artist who has completed multiple sold-out world tours, won four Grammy Awards and sold more
than 60 million records, including more than 350,000 in New Zealand, during the course of his extraordinary career,” Mr Dainty said.

Bublé said he was thrilled to be playing all of his hits plus songs from the most recent album ♥ for New Zealand audiences.

“I’m really excited to be heading back on tour and to play for my New Zealand audience again,” he said. “It’s been six years since my last New Zealand show and so much has happened in that time. I can’t wait to sing some of my all-time favourites and to share my new songs and stories.”

James Erskine, Sports Entertainment Limited chairman says he is thrilled to have an artist of Michael Bublé’s calibre at the Mission Estate Winery: “The summer of 2020 will be one to remember and we continue to feature the biggest and best artists on the world entertainment stage,” Mr Erskine said.

Recent reviews from Bublé’s return to the world stage this year said:

“His lustrous lyric baritone, as affable and magnetic as his punchy, droll personality — was in fine form throughout.” Dallas Observer

“He danced. He laughed. He skittered down the stairs to get closer to the fans ringing the catwalk. He acted, as he had throughout the show, like a man genuinely grateful to be back on stage.” www.ajc.com

“He joked about the lavish expense of the 36 musicians behind him saying, “I know my manager looks at me, and looks at Ed Sheeran, and says ‘What an a-hole.’ ” Post Gazette

Bublé has achieved three number one albums in New Zealand, including 2013’s To Be Loved, 2011’s Christmas, and 2003’s Michael Bublé, and seven top five albums. His Christmas album is certified 11 x Platinum in New Zealand!

This tour is supporting Bublé’s ♥ album, which has achieved Gold status in New Zealand since its release in November 2018 when it debuted at #2 on the Official Top 40 chart.

Tickets for An Evening with Michael Bublé 2020 New Zealand Tour are on sale now at https://premier.ticketek.co.nz/Shows/Show.aspx?sh=MICHAELB20

Back to Whats on »